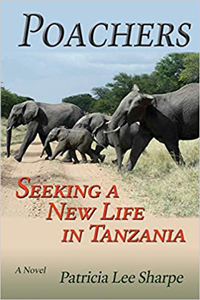 Reinstated after leaving the U.S. Foreign Service to marry the wrong man, Diana Forrest is sent to counter Soviet propaganda in Cold War Tanzania where graft corrupts the socialist ideal and poachers slaughter elephants for ivory. Toggling between a diffident boss and a hard-to-please Ambassador in a media wasteland, Diana spends weekends in the bush courtesy of a Tanzanian subordinate with a safari business on the side. As that relationship trends from teamwork toward intimacy, Diana wrestles with her conscience and is also troubled by safari companions who aren’t above petty poaching–or worse: one of them may have colluded in the murder of a conservation-minded headman. It’s soon clear that Diana’s job performance will rate an excellent follow-on assignment, but she’s not sure she wants to leave.

Ambassador James Freeman was fed up with the Information Officer and the feeling was mutual. One or the other would have to pack up and leave Dar-es-Salaam—and it wasn’t the Ambo. He demanded a competent replacement. And fast. That didn’t happen. No available Foreign Service Officer would touch an assignment that looked like a suicide mission.
Then I came along.
“That’s the deal,” I was told. “Take it or leave it.”
Having been IO at a similar post before resigning to marry a hot shot foreign correspondent, I had no qualms about facing the most combative local reporter. Jousting with a touchy ambassador was another matter. How long would I last? Irrelevant. I needed a job.
“I’ll take it,” I said.

To read the rest of
Poachers, Seeking a New Life in Tanzania