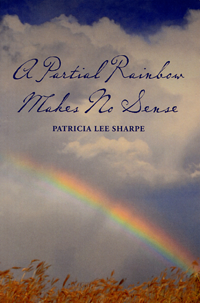 “A varied but cohesive collection that nicely balances the big and small pictures….If a reader were to pick up this collection and flip to a random poem in its first half, he or she might peg Sharpe (Coming and Going Love, 2010) as a poet with plenty to say about violence and poverty, iniquity and inequality. A peek into the book’s second half, however, might give a reader the impression of a finely focused writer tuned to appreciate subtle social exchanges and their implications. A full reading…reveals [how] the voice that laments suffering and military action gets blended with a more humorous voice that muses on bathroom lines and artificial knees….[Sharpe’s] voice is critical but tinged with hope; her words are sharp but chosen wisely. She seems to see something complete beyond life’s fragments—the idea that a world with war, poverty and inequity may not make sense, but like a partial rainbow, there’s still a touch of beauty in its imperfection.”  –Kirkus

To read the rest of
A Partial Rainbow Makes No Sense